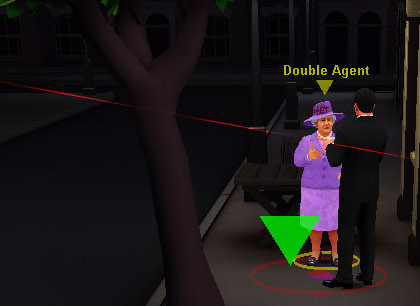 The laser is a beam of red (optionally green) light emitted by the sniper's weapon, directed at the location under the sniper's reticle. The spy is equipped with infrared contact lenses and can see the laser, but the other partygoers cannot see it and will not react to it in any way (except for Ms. J's dog, who ducks into her purse when the laser comes near).

The sniper aims the laser with the mouse or the right stick, and can move left and right with the arrow keys or the left stick.

To shoot a partygoer, the sniper must release the safety by holding down SHIFT or by pressing either stick. They then point the laser at their target and left-click or pull the right trigger. If the laser isn't pointed at anybody, the weapon will not fire. Once someone is shot, the game ends immediately. If the target was the spy, the sniper wins; otherwise, the spy wins.

A sniper may wish to highlight a character that seems suspicious or that they wish to keep an eye on (such as Toby or the ambassador), or lowlight one that they believe to be an NPC. By pointing their reticle at a character, the sniper can highlight them by left-clicking or pulling the right trigger, or lowlight them by right-clicking or pulling the left trigger.

Information Revealed to the Spy Edit

By looking at the laser, the spy can determine the sniper's current location (although network latency may cause it to lag behind the sniper's actual position a little). They can also get a general sense of what the sniper may be looking at. To avoid revealing that information to the spy, the sniper may choose to point their reticle away from the area they are viewing, watching it "from the corner of their eye." Level geometry (such as pillars or muntins) will block the laser, so a sniper may take advantage of these features to prevent the laser from entering the play area.

If the sniper swings the laser to point at the spy briefly, then moves away, the spy may consider it a sign that they may have been highlighted or lowlighted.

Retrieved from "https://spyparty.fandom.com/wiki/Laser?oldid=5912"
Community content is available under CC-BY-SA unless otherwise noted.